Depression has become a menace amongst students in our country due to many reasons.

This has led the university of Nairobi to hire needy students for jobs on contract in order to curb depression that is caused by financial challenges at the institutions.

Prof. Stephen Kiama who is the vice Chancellor of UoN stated that the office of the dean of students and career has been given a task to identify the needy students who will be assigned jobs while still pursuing their careers. 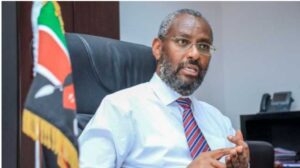 He further said that, it was sensible to employ their students on low wages that employing outsiders who will demand a lot of money.

During an awareness walk by students of UoN and the Mount Kenya University counterparts which was organized by UNESCO over the weekend, Prof Kiama said depression has become rampant at the University which leads to deaths caused by suicide and other illnesses hence, requiring immediate attention.

Kiama advised student leaders and deans from other universities to create awareness levels that could enable them to monitor and assist students who are mentally ill.

Since depression has become the main concern in our universities and has led to suicide, unwanted pregnancies, HIV/Aids and dropping out of school, there is need to have a collaborative effort with the stakeholders to help students who are affected by depression day in day out.

Vice Chancellor for MKU, Prof Deogratius Jaganyi said that student leaders and clinics have been put into task since they deal with depression among students daily which is a great concern.

He proposed to introduce the gender-based violence, sexual and reproductive health and rights, and mental health which comes as a result of depression into a school curriculum as a co-curricular activity.

The VC said, due to the economy heat, students need proper guidance to reduce risks of unplanned pregnancies, contracting HIV/Aids.

The UNESCO Regional Director for Eastern Africa and Prof Hubert Gijzen, stated that the aim of introducing the program is to involve universities in managing the mental illness of students.

According to him, a academic learning has been prioritized by universities instead of involving other activities like counseling to enable students have good mental health.

Prof. Gijzen said, the gap has been identified and brought on board whereby universities are required to help their students in mental health by creating more awareness and having a dialogue with them.

26 Courses Offered In Universities Yet They are Uncreditted

26 Courses Offered In Universities Yet They are Uncreditted