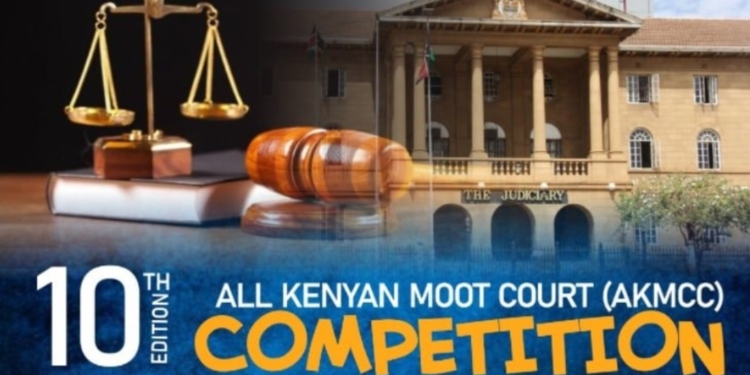 The university of Nairobi has topped in the All Kenyan Moot Court Competitions (AKMCC) for the tenth time.

This annual competition that was founded back in 2013 and  hosted by Kenyatta University School of Law, brings together all Kenyan law schools.

During the finals that were held on Friday at the KUSOL Park lands campus, the AKMCC president Alex Assenga said that the competition provides a forum for law students to discuss a variety of issues.

“The competition enables us to deliberate on matters concerning local contemporary issues ranging from human rights abuse, the elections, human-wildlife conflict among others. Quoted Mr Assenga.

Strathmore University came in as the second institution in the competition. It was led by Shamia Muchesia and Cherry Makena. Shamia Makena was awarded for being the best overall student.

The competitions were held between March 21 to March 25.

The Kenyatta University Vice-Chancellor Professor Paul Wainaina said, the annual exercise has provided a platform for Kenyan law students and legal practitioners to converge annually and share expertise in the legal discourse on contemporary legal issues in kenya for the past nine years.

Wainaina further stated that this year’s theme, ‘Electoral Justice and Democracy Ensuring Electoral Credibility and Adherence to the Rule of Law,’ resonates with Kenya’s electoral history and current circumstances ahead of this year’s elections.

The competition was launched by the former Attorney General Professor Githu Muigai, who chastised the judiciary for it’s erratic judicial jurisprudence.