TSC sends many show-cause letters to school principals and heads of departments.

The Teachers Service Commission (TSC) Sends several show cause letters to school principals and headteachers in both primary and secondary schools.

These teachers have continued to receive show cause letters from their employer, over poor KCPE and KCSE results.

Teachers Service Commission (TSC) want the school heads to give reasons as to why their schools have performed dismally for the last three years. 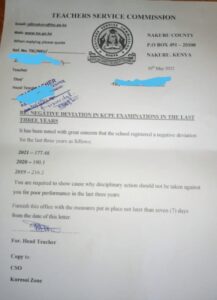 “You are required to show cause why disciplinary action should not be taken against you for poor performance in the last three years,” read one of the letters sent to a school in Kuresoi located in Nakuru County.

“Furnish this office with the measures put in place not later than seven days from the date of this letter,” further read the letter.

TSC directed its Regional Directors to combine and submit data on the performance of the schools in the National Examinations for the last three years in their respective regions immediately following the release of the 2021 KCSE examinations.

The data included performances from both primary and secondary schools,

In a March 11, 2022 memo signed by the acting Staffing Director Antonina Lentoijoni, the Commission had instructed the field officers to submit the data around two weeks after the release of the 2021 KCSE results.

The memo caused panic among school heads in underperforming schools.

Heads of Institutions, as well as teachers in some schools, have been carefree as regards the performance of their students given the belief that nothing can happen to them regardless of the KCSE or KCPE results. The Show Cause letters are set to set a new tone in the way teachers approach their day to day duties and responsibilities.