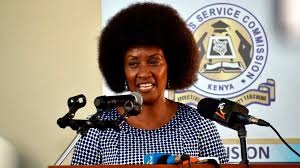 A top official of the Teachers Service Commission (TSC) has been sacked over claims of soliciting for tenders from principals, corruption and abuse of office.Deputy chief executive Kennedy Juma Mulunda was found culpable of using his position to intimidate more than 10 principals from various schools in Western and Nyanza into awarding some companies contracts.

A team of commissioners who probed the matter found Dr Mulanda guilty of threatening to deal with teachers who defied his overtures in the event that he becomes the chief executive officer after Dr Nancy Macharia.

His termination was communicated to him in a letter dated June 20, signed by Dr Macharia, who is in-charge of the secretariat staff.Dr Macharia said she was acting under instructions from the commissioners after investigations from principals found overwhelming evidence against him.

Dr Mulunda was issued with a termination letter after being taken through a disciplinary committee in January. He is also accused of using his position as the deputy CEO to intimidate the commission’s officials in the regions.

According to sources, TSC chairman, Dr Jamleck Muturi, appointed a special committee to investigate the allegations of abuse of office against Dr Mulunda and compiled a report in February.The Nation learnt that Dr Macharia did not sit in the investigating committee as disciplinary mandates are purely done by the commissioners under the directives of the chairman.

Among the allegations, Dr Mulunda is accused that on diverse dates in 2020 and 2021, he abused his office by influencing, coercing and intimidating staffing officers to effect transfer of several principals in Western and Nyanza outside the approved transfer matrix in disregard of the commission’s transfer policy.He is also accused of coercing principals from various public schools to award tenders to companies associated with him against the Public Procurement and Assets Disposal Act.

Among the tenders he demanded were fumigation services in various schools.

The Nation learnt that 10 teachers from the region were invited by TSC and they testified against him.

In a report prepared by the commissioners, a principal testified that Dr Mulunda influenced the school to award the tender of laboratory chemicals and equipment to a company that was not among the prequalified suppliers.