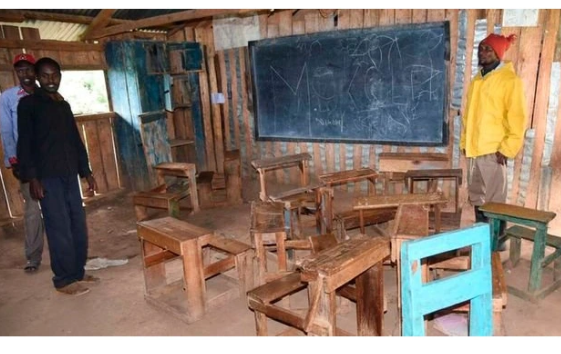 Chimgondi primary school is situated two kilometers Eastwards of Kapsimotwa trading center near the boarder of Bomet and Nyamira Counties.

The school premises can be accessed from every directions but they have a small gate with a padlock fastened on a rusty chain.

There is no any perimeter wall around the school.The top student in Chimgondi primary school in the just released Kenya Certificate of Primary Education tried his best and managed to score 137 marks out of 500 marks while the last one scored 400 marks.

Nation Media Group visited the school to see why they performed like that and they probably found the answers.

The school set up is all trouble with buildings constructed carelessly. The school is bushy with a small dusty road leading from the gate and slowly disaapears while inside the compound giving a clear view of green grass.

All the students who sat for their KCPE at this school and their teachers were nowhere to be seen probably due to the shame that they had received and the disappointment that came with the failure.

After studying for eight year and preparing themselves for the national exams, they only managed to get a mean score of 78.35 and are now the center of ridicule.The school is made of two blocks whereby one of it is made of block while the other one is made of timber.

The permanent block also holds the administration office and the PP1 and PP2 classes. The students inside the school are hardly 100 since most of them have already transferred to other schools.

According to the villagers, the teachers are complacent and the poor results is due to their laziness.