The following information has been revealed ahead of Knut SG’s announcement of the CBA contract with TSC next week. 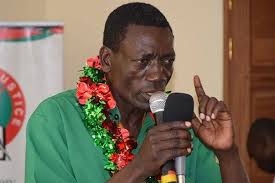 Kenya’s National Union of Teachers (Knut) led by its secretary general, Henry Collins Oyuu, will speak to the public next week about what the union agreed with the Teachers’ Service Commission (TSC) in their latest meeting.

TSC participated in a series of meetings with Knut from Tuesday 5 to Friday 8 July 2022 to conclude an agreement on salary increases for teachers, among other issues.

This week Hesbon Otieno, who is also Knut’s deputy secretary general, said talks on wage increases and other teacher-related issues have been discussed and closed.

“I can say here that we had a cordial discussion which ended on Friday and that we successfully concluded our meeting with TSC”, said Otieno amid applause from the teachers.

Otieno, however, did not disclose what was presented as an offer by the Commission and what was agreed.

He said talks about the CBA deal with TSC will be revealed to the public led by their secretary general Collins Oyuu.

“We will reveal the information at the right time and the secretary general himself will speak and the whole republic will know the discussion we are having with the Teacher Service Commission,” said Otieno.

The CBA has also allowed the promotion of teachers in Arid and Semi-Arid Areas (ASAL) on affirmative action. However, that left teachers without a pay raise, but TSC CEO Dr Nancy Macharia has promised to review it when the economy improves.

Both Knut and Kuppet are pushing for a salary review citing inflation. Knut wants a salary increase of between 15 and 20 percent for its members.

Oyuu is also pushing for a review of commuter and housing allowances to cope with rising inflation.

The Commission, informed by opinion polls showing that teachers are very unhappy, is struggling to reach an agreement with the teachers’ unions ahead of the general elections.

With the skyrocketing prices of the good and ever-increasing inflation, teachers’ lives have become unbearable and can only be lightened by a raise in salary.

Some teachers overwhelmed by the burden of the high cost of living have taken their own lives and the most recent case is that of an elementary school teacher in the village of Kandongu in Kirinyaga County.

The teacher, who jumped into a well on Tuesday, left a farewell note in which she explained why she had taken her own life.

According to Wilson Koskei, Chief of Police of Mwea West Sub County, Ms. Wangithi Karuria, 56, committed suicide due to the huge debts she owed to women’s groups and banks. Knut agreed with the Commission to send primary school teachers to teach in lower secondary school next year.

TSC in response, however, remained adamant that only PTE teachers with a minimum KCSE grade C + (plus) with grade C + (plus) and above in the two teaching subjects will be able to teach in lower secondary school.

The union wants the state to bear the cost of teacher training. However, it appears that teachers will continue to pay for their training despite a recommendation from Parliament.

Knut also discussed with the TSC the parliamentary recommendations ordering the promotion of teachers who have updated their certificates.

Parliament recommended that the TSC continue to recognize and recognize the higher qualifications acquired by teachers while in service.

MPs want the TSC to promote teachers who have earned bachelor’s, master’s and doctoral degrees while in service.

“The TSC is expected within six months of adopting this report to enter into negotiations with teacher unions on career progression guidelines (CPG) and uphold the rights of teachers who have acquired relevant qualifications at the time of their service.

“Additional TSCs will provide guidelines on relevant courses to be taught by teachers,” reads the report from the Education and Research Committee. However, the TSC wishes to use TPD training as a reference training for teacher promotion. The Commission states that automatic promotion of teachers who have updated their certificates is not possible.

TSC stopped the automatic promotion of teachers who advanced their studies in January 2014. Those who submit their new certificates to TSC only receive letters of acknowledgment.

However, the TSC wishes to use TPD training as a reference training for teacher promotion. The Commission states that automatic promotion of teachers who have updated their certificates is not possible.

TSC stopped the automatic promotion of teachers who advanced their studies in January 2014. Those who submit their new certificates to TSC only receive letters of acknowledgment.