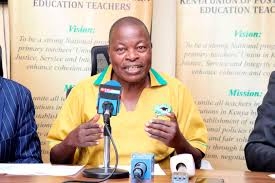 Last year the commission signed a non-monetary CBA with teachers that is expected to last until 2025 citing difficult economic times.

The move broke the hearts of teachers who expected an increase to cushion them from the inflation that had significantly reduced their purchasing power.

However, tutors can still smile if their union Knut’s latest move to ask for new talks with TSC bears fruit.

Apparently, the union has written to the committee asking for the renegotiation of the CBA.

According to Knut Hesbon Otieno’s deputy secretary general, the move followed the president’s latest announcement about raising the minimum wage by 12%.

“The president said that, after evaluating economic growth and the revival of industrialization, the economy is doing very well,” he said.

He said that KNUT’s research team is currently conducting an economic investigation for submissions at TSC. TSC had to pay attention to an advisory opinion on salaries and the compensation commission to freeze the wage increase for two years leading up to the Non-monetary CBA.