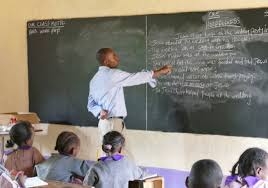 The teachers Unions have been in the forefront in pushing for teachers’ salary increment in the recent past after last year’s non-monetary collective bargaining agreement (CBA).

Following the recent announcement from the teachers Unions, the proposed salary increment for teachers in both primary and secondary schools is going to bear fruits in the near future.

What has been discussed in series of meetings between  the Teachers Service Commission (TSC) and the teachers’ union has been made public by the deputy secretary-general of the Kenya National Union of Teachers (KNUT).

The discussions about salary increases and other matters impacting teachers have reached in a fruitful conclusion according to Hesbon Otieno, the KNUT deputy secretary-general.

Teachers cheered Otieno as he remarked, “We had a pleasant dialogue that ended on Friday and we successfully concluded our meeting with TSC.”

Otieno withheld information on the Commission’s proposal and the terms of the agreement.

Collins Oyuu, the secretary-general of KNUT, led a meeting last week with the Commission to discuss a potential agreement that would result in salary increases by the end of this month.

Together with the Kenya Union of Post-Primary Teachers (KUPPET), the union has been advocating for a review of the July 2016 collective bargaining agreement (CBA), which did not include any financial increases for teachers.

KNUT officials have expressed optimism that a review can be conducted to include a pay increase even if the CBA did not include any financial advantages.

“We’ll share information when it’s appropriate. The entire republic will be aware of the conversation we are having with the Teachers Service Commission because the secretary-general himself will speak, according to Otieno.

Maternity and paternity leave are guaranteed to last 90 to 120 days for female teachers and 14 to 21 days for male instructors in the 2021–2025 CBA, which satisfied teachers.

The CBA also called for the promotion of educators who operate in scarcely staffed Arid and Semi-Arid (ASAL) regions.

In her speech to the public after the 2021–2025 CBA was signed, TSC Chief Executive Officer said that the CBA might be reviewed if the nation’s economy improves.

According to TSC, a Salaries and Remuneration Commission advisory opinion prevented teachers in the public segment from receiving any wage increases (SRC).

Dr. Nancy Macharia had previously stated that the SRC had “recommended that there would be no reassessment of the basic wage structures, allowances, and perks provided in the public sector in the financial year 2021/2022 – 2022/2023.”

KNUT is currently asking for a wage increase of 15-20%, while Oyuu also wants a revision of commuter and housing allowances to keep up with the nation’s rising inflation.

Teachers are currently battling with inflation, the growing cost of living, and dwindling paycheques, much like the rest of Kenya, which has led to some turning to suicide. For instance, a primary school teacher in Kirinyaga County committed suicide.

The promotion of primary school teachers to teach in junior secondary schools and their TPD training were additional topics that were explored.

The Commission has demanded that in order to be deployed to secondary schools, instructors must fulfill certain conditions.

KNUT is also urging the Commission to permit primary school teachers with a secondary choice degree who received a grade C (simple) on their KCSE to teach in junior secondary.

The organization is also having discussions over the suggestions made by the Parliament, which called for the advancement of instructors with upgraded credentials.

The Commission has justified its decision to implement Career Progression Guidelines, arguing that the former method of promoting teachers had become impractical as a result of the large number of teachers graduating with a variety of qualifications.

The MPs believe that promotions should be given to instructors who have earned diplomas, bachelor’s, master’s, and doctoral degrees while still employed.

The TSC has stated that it plans to use the TPD as a mechanism for teacher promotion and that junior secondary schools will continue to be the only locations where PTE teachers can be deployed.

TSC states that in order to be assigned to teach at the junior secondary school level, a primary school teacher must;

Be a citizen of Kenya

be a P1 certificate holder;

possess a bachelor’s degree in education with a minimum of two teaching certifications;

must have received at least a C+ (Plus) in each of the two teaching topics and a C+ (Plus) overall in the Kenya Certificate of Secondary Education (KCSE) or its equivalent;

serving as an employee of the Teachers Service Commission.