by Vee K
in Political News
0

If elected president in August, Deputy president William Ruto has promised to revisit the Higher Education Loans Board funds.

Dr. Ruto stated in Kwale County on Tuesday, March 29, that he sympathized with university students about the poor distribution of HELB loans and that his government will work to streamline the fund.

First and foremost, his administration will eliminate the interest rates that students are charged when repaying credit. He described the interests as punitive and oppressive to young people trying to make a name for themselves.

“We want to revise HELB and the funds that are given. We want to first remove the interest and because that money is very little, it should be increased so that Comrades can have enough to pay for their needs,” Ruto said. 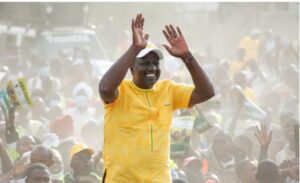 The DP will also ensure that the funds are disbursed on time to avoid scenarios in which students demonstrate or drop out of university or college to seek upkeep money.

Ruto’s reasoning was based on his belief that the government’s current allocation for helb is insufficient to cover learning and upkeep for Comrades. His administration would revise the budget to ensure that students are not overburdened while studying.

Listing students in the credit reference Bureau (CRB), he noted, further demoralized them, and he promised that if he becomes president, the listing would be removed.

According to the presidential candidate of the United Democratic Alliance (UDA), listing students is unnecessary because most of them require clearance to secure their first jobs.

Ruto also stated that he will convert HELB from a loan to a grant in ierder to facilitate higher education while not oppressing young people.

“I know the money comes very late and people are struggling at that time. We will hasten the process and make sure no one is listed in CRB because of HELB.

In future we will make the fund to be a grant, especially to the nerdy children,” he added.

Some kenyans questioned whether he was making empty promises or truly intending to transform the fund.

One Joe Kioi tweeted that he was listed in the CRB due to late payments on helb loans, and that if Dr Ruto’s government could resolve that issue, millions of other kenyans like him would be relieved.

“This is why I was put on CRB like seriously, I have husled so hard to clear this loan… A government that doesn’t care for its young people. The next administration must make this loan a grant, ” he lamented

Factors To Consider When Choosing a Career

Factors To Consider When Choosing a Career