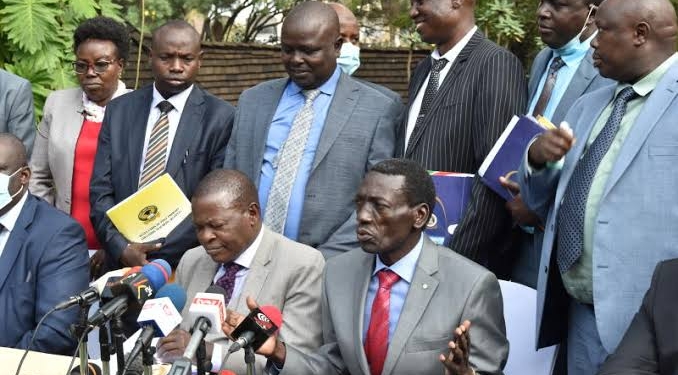 KNUT’s Fresh Demands On Delocalization And Grading Of Teachers

The distributed delocalization strategy for teachers has been scrapped, but the Kenya National Union of Teachers (KNUT) is requesting that the Teacher Service Commission, TSC, reassess the grading system for teachers and familiarize them with it.

The most recent media briefing, according to Secretary General Collins Oyuu, was intended to provide an update on the union’s relationship with TSC as well as address current issues that were discussed during the Naivasha retreat with the employer TSC and offer potential solutions.

“We received many complaints from our respected members and took up the matter with the employer head-on. The current position is that the policy has been repealed,” said Mr. Oyuu. As such, Oyuu urges teachers who are still aggrieved by the policy to consult the union for solutions.

The delocalization policy, which the union claims has not been well received by teachers, was intended to have teachers reassigned to new locales other than their places of origin or where they have lived since they started their careers as teachers.

Since TSC hasn’t invested much in sensitizing teachers on the same, most teachers are stuck between the old grading system and the new one because the employer hasn’t done much, according to KNUT boss, the union’s proposal shall and will continue to be that teachers be properly sensitized on their positions within the grading system.