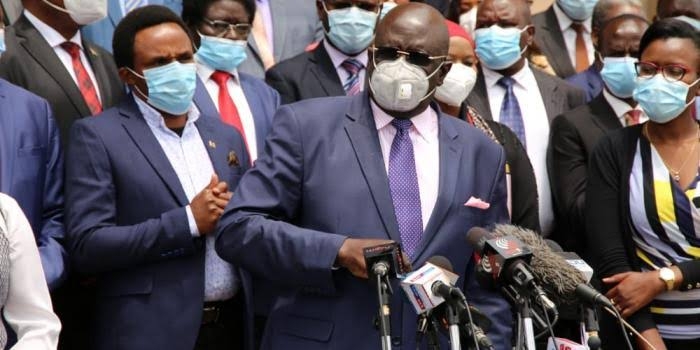 The CS. For Education Prof. George Magoha has issued a fresh directive to parents and local education authorities to have all students who performed well but are unable to join secondary schools of their choice join day schools with immediate effect.

Speaking in Isinya, Kajiado County, the CS argued that lack of school fees should not be a reason preventing parents from admitting them to high schools.

He noted that if parents lacked school fees to take their children to boarding schools, they should instead transfer them to day schools near them.

He further revealed that the state was providing free education in daily secondary schools and urged the parents to take advantage of that.

He also directed the education officials in the constituency to carry out mop-up exercises to ensure that all students are enrolled in secondary schools.

The CS had argued that some parents had declined to take their kids to school on the pretence that they lacked school fees.

“All education officials must mop up all students and take them to the nearest day schools because they are absolutely free, the government has catered for free secondary education and all a child needs, is uniform,” he stated.

This comes a week after Education stakeholders raised concerns over the high number of students who are yet to join form one despite the government’s 100 per cent transition policy.

Magoha, has however promised to begin a mop-up exercise on Monday, May 16, so that no student is left behind.

“We still have a sizeable number of students who are yet to report. I think we can say that time is not yet over as we are beginning the exercise on Monday,” the CS admitted at the time.