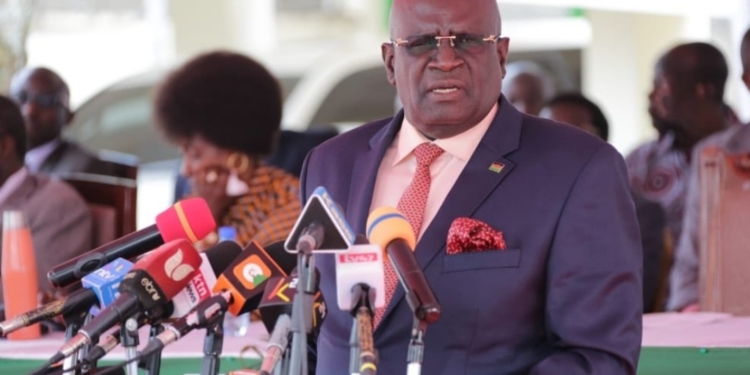 Speaking in Kisumu County yesterday May 7, Magoha stated that the schools will not be relocated despite the recommendations by Governor Anyang’ Nyong’o.

The CS gave assurance to the learners, parents and teachers from the schools that the government will not be moving them from the city centre as suggested by the governor.

Governor Nyong’o had suggested that Kisumu Boys and Kisumu Girls schools be moved away from the busy city centre.

The governor ugued that the schools add no economic value despite sitting on prime land in the city of Kisumu.

He defended his plans to relocate the two national schools from the CBD explaining that the current location of the two institutions did not align with the plan to make the lakeside city a commercial hub.

The governor stated that the two schools are sitting on prime land within Kisumu CBD without bringing economic value away from his plan to make Kisumu city a profit-making entity.

Considering the value of the place, that land needs to be useful.

“We need to construct an integrated urban centre rather than schools,” Nyong’o explained.

The governor proposed that the two schools be relocated to the outskirts of the city and share facilities to avoid extravagant use of government land.

“Each school has a field, a swimming pool and other amenities that have occupied chunks of land. Why don’t we take them to an area where schools share amenities? We don’t need to have a field for each school in a town,” he explained.

He has been pushing for maximum utilization of land within the county and spearheaded the construction of a stadium and convention centre at the Kisumu Agricultural showground.

Kisumu Boys and Girls High schools are located within the Kisumu Central Business District, opposite the main bus terminal. Although the two share a fence, the main entrances are a kilometre apart and are on different roads.

The looming relocation of the schools has been previously met with resistance from locals and alumni. Kisumu Boys alumni association led by James Mwamu moved to court in February 2021 to block the plan claiming that they had not been consulted.

Kisumu Boys boasts of rich 100-year history dating back to the 1920s. Initially a primary school for the predominant Indian community who were railway construction workers, it was elevated to Indian High School.