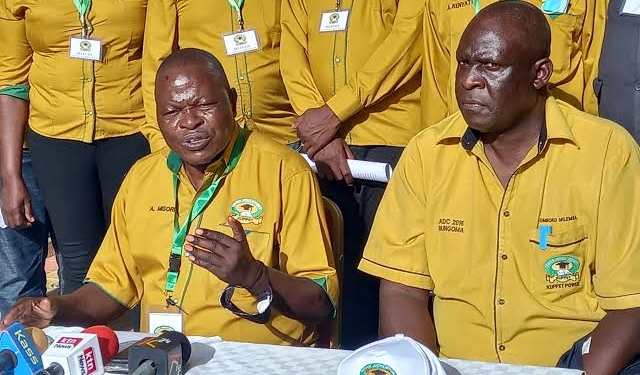 The Kenya Union of Post-Primary Education Teachers has questioned the government’s preparedness in implementing  the Competency-Based curriculum in schools.

Secretary-General Akello Misori said the government was focusing only on building infrastructure rather than hiring teachers to address the deficit.

“Junior secondary preparation is dominated by infrastructure creation. We are experiencing a shortage of teachers, yet the government has started 100% transition.”

He said that the government has stopped the  talks to increase the salary and allowances of teachers, yet some public servants get huge allowances.

“The review of teachers’ salaries was put on hold due to Covid, but the economy has grown since then and we can start talks with our  employer very soon,” he said.

The Kuppet chief also asked TSC to fund the training of teachers for professional development.

Criticizing the government for militarization of examinations, he said that the head teachers who manage the examination centers should be respected.

“There is a case where the headmaster was mishandled by a security officials on the suspicion of leaking the exam.”

Meanwhile, Elementary Education and Basic Education PS Julius Jwan said that the Education ministry takes about 26 per cent of the national budget and raising more funds for the docket may be difficult.

Dr Jwan refuted the claims of militarization of the exam, saying that the security agents only act on reports of fraud in specialized centres.

Stephen Odebero, professor of educational planning and director of postgraduate studies at Masinde Muliro University, said more than 1.3 million children aged 14 to 17 are out of school.

“We cannot account for them. There are more boys than girls. The government should invest in a survey to examine the reasons for non-schooling,” said Prof Odebero.

He suggested that the large number of out-of-school children may be due to lack of jobs for parents who cannot afford fees.