Bad news to Kenyan workers after the newly formed government finalized on how salaries will be cut off to raise more money for the state.

Workers will be forced to get a monthly pension contribution of a maximum of 6 per cent of their salaries to the National Social Security Fund (NSSF).

The NHIF expenditure has also been increased which means workers who benefit from the program will have to pay extra money.

According to data tabulated by The Star, a worker earning Ksh 50,000 will be be deducted a total of Ksh 10,503 every month.

Above is a full data on how workers will be deducted sourced from The Star. 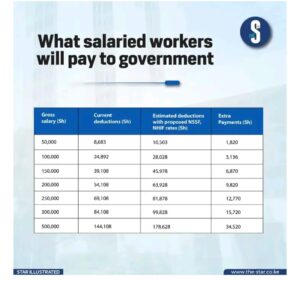 No Bail Out As Universities Debts Raise To Ksh57.1 Billion

No Bail Out As Universities Debts Raise To Ksh57.1 Billion