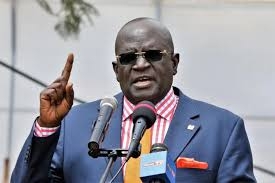 The CS was speaking while commissioning the second phase of classrooms construction in Mombasa. He noted that ministry is for now focusing on the completion of the classrooms before the transitioning to junior secondary school.

According to CS Magoha, the government is already spending 25.9 percent and and asking for 60 per cent payrise is unreasonable.

“The government is already spending 25.9 per cent on education, although I’m not the one in salary docket, the 60 per cent of what teachers are asking for is unreasonable,” he said.

The CS said the Kenya’s economy had deteriorated and demands made by the teachers can not be met.

He noted that having value for money will solve those issues since the government has already spent enough of the budget on the ministry.

Knut secretary general Collins Oyuu on Wednesday said the high cost of living has pushed for a rethink of teachers’ salaries.

“We have commenced a structured negotiation with the employer to see to it that a 60 per cent salary rise is awarded to teachers,” Oyuu said.

On teacher promotion, the union said there is a need to review the policies on the same.

Currently, teachers are promoted based on appraisals and not the qualifications achieved.

“It is ironic when one is promoted and then they lose some benefits they really worked hard for,” Oyuu said.

At the same time, the union wants the government to foot their refresher training courses to cushion teachers from the high cost of living.

Furthermore, the the giant union has urged Members of Parliament to approve Sh4.5billion to cater the Teacher Professional Development (TPD) refresher courses for teachers.

The union also wants a review of promotion criteria to benefit tutors who have obtained higher qualifications.

Mr Oyuu said there are over 60,000 teachers with additional qualifications such as degrees, masters and PhD and they deserve to be promoted.

Presently, the teachers’ employer and the union has an active CBA that only provided for enhanced maternity and lenient transfers to cushion couples.

Two weeks ago, the TSC and teachers union retreated to Naivasha for possible review of the CBA among other issues.

According to Knut, President Uhuru Kenyatta announced a salary increment for civil servants during Labour Day celebrations; a proof that the country’s economy has recovered from the Covid-19 pandemic shocks.