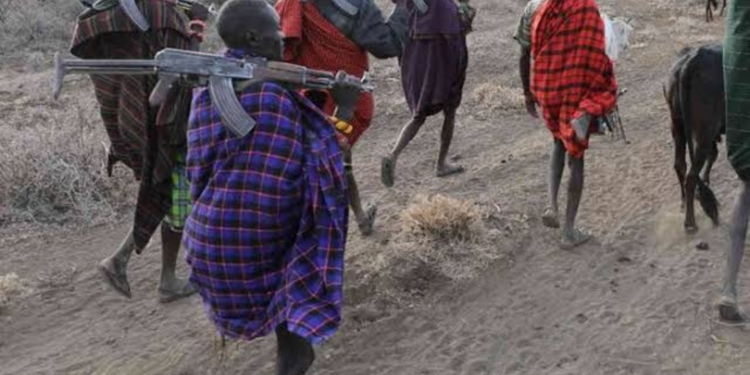 Kerio Valley has become the valley of death in that it has claimed many lives that are caused by bandits from their neighbouring county.

Today, bandits have shot dead three more people in in the same valley whereby a turkana herder was killed as another one was killed in baringo, while the third person’s body was found floating in kerio river.

The bandits have seemingly become adamant to the ultimatum that was given to them severally to surrender the illegal arms that were in their possession failure to which the government will disarm them forcefully.

As a number of families have evacuated the place, the government has deployed security officers in muchongoi, baringo County which is said to be so much affected by the attackers.

The baringo county commissioner, Abdrisack Jaldesa has assured residents of that area of their security and safety since they’ve been able to calm down some places.

The elgeyo marakwet county commissioner too said the security personnel have been able to restore peace in some places of Kerio Valley.

As the national examination are approaching, students will be given maximum security to ensure that they are safe throughout the exam period. Therefore parents have been urged not to panic in anyway rather support their children so that they can have peaceful moments, Korir said.

85 people have been killed in the past seven months which is too alarming. Although the government has deployed a number of security personnel to identify people who own guns illegally so that they can be dealt with.

This comes in after the Regional Coordinator for rift Valley, Maalim Mohammed gave locals a two week time to surrender the illegal guns voluntarily.

As per today, one week of the ultimatum has lapsed and we are waiting for the police to give a report if any gun has been returned.

Fred Matiang’i in his meeting with the security team and leaders from the region, gave orders for the disarmament exercise in that region.

However the Inspector General has urged the community to help them with alternative solutions which they understand better when it comes to insecurity since they know which challenges they are facing.

Enough is enough as many people have lost their lives in the region and now its time to engage the community and leaders for a dialogue on how to curb the insecurity concern.