African Students Stranded In Ukraine As Russia Invades The Country

A lot of African students in Ukraine are attempting to get out of the country since Russia was invading the country.

The Ukraine country is a very popular place for African students whereby they offer education at a very low tuition fees and its well known for its historical ties with Africa in the Soviet era.

The country is full of African students studying in its universities, majorly in medical fields. Others go there in search if greener pastures as well.

Among the International students studying  in Ukraine, Africans take 20 per cent of all across the towns and cities if the country.

There have been war between Ukraine and Russia whereby on Thursday, explosions were heard in several towns of the country including Kyiv which is the second largest city, kharkiv and the Black Sea port of Odesa, leading there students to raise an alarm for their safety.

Among the thousands of students there are five Kenyan students who are trapped in Ukraine since the war started with the Russian government.

There are approximately 4,000 Nigerians who are enrolled in Ukrainian Universities. They are the second largest group of international students in Ukraine. These students were all over social media expressing their dissatisfaction with their Government due to lack of information.

Other countries like Morocco has 8,000 students whereby Egypt has 3,500 students.

Two weeks ago, the Moroccan government called on citizens to leave Ukraine as early as possible. The head of Egyptian Community in Ukraine, Ali Farouk, last week said, the authorities in Ukraine and the Egyptian embassy were trying their best to make sure the Egyptian students return home safely. 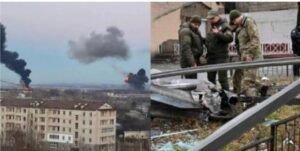 They have been having concerns about their safety since the outbreak of war.

The Kenyan government is concerned about the war, as well as financial sanctions that are imposed on Russia, on its vital tea industry. Its a big concern since Russia is one of the top five tea consumers which helps the country earn more currency.

As at now, no African country is supporting Russia’s intervention including Mali and Central African Republic where Russian forces are assisting governments in fighting insurgencies.

The Ukrainian embassy in Kenya issued a statement requesting for assistance after the Russian military invaded Ukraine. Ukraine’s ambassador to Kenya, Andrii Pravednyk, told the media that at the moment only the world can prevent Russia from invading their territories. 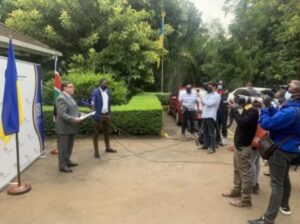